Investigators: Melissa, Brent, Jon, Wendy, and Daine, a local theoretical physicist who was in this instance invited to observe the investigation.

Article Disclaimer: This article deals with an object of historical significance that once belonged to an officer of the Third Reich. If discussion of Nazi Germany or the image of a swastika in any way offends you, you should not read this article. The S.P.I.R.I.T. team presents the evidence from this case from an objective and fact-based scientific point of view. Nothing else. The spirit we helped cross over was a confused soul who needed our help. He very likely died scared, alone, and confused – far from home, doing what his country told him he had to do.

The S.P.I.R.I.T. team was dispatched to the Folsom, CA home of an older couple.  Although the couple had experienced very little paranormal activity in their home, they had recently inherited an object of historical significance that seemed to have its own energy – to the point where the husband, Michael, acquired a K2 meter in order to test the object. The object in question was a World War II police helmet worn by an officer of the Third Reich.

Since the claims of paranormal activity were specific to the helmet, S.P.I.R.I.T.’s first task was to verify the authenticity of the helmet, and when it was manufactured. This is important because if the helmet was manufactured after 1945, it would not be authentic and would therefore not be of historical significance.  It is a sad truth that authentic artifacts from the Nazi Regime are considered highly collectible – anything collectible can and very often is reproduced. So we had to make sure we were dealing with the real McCoy here. 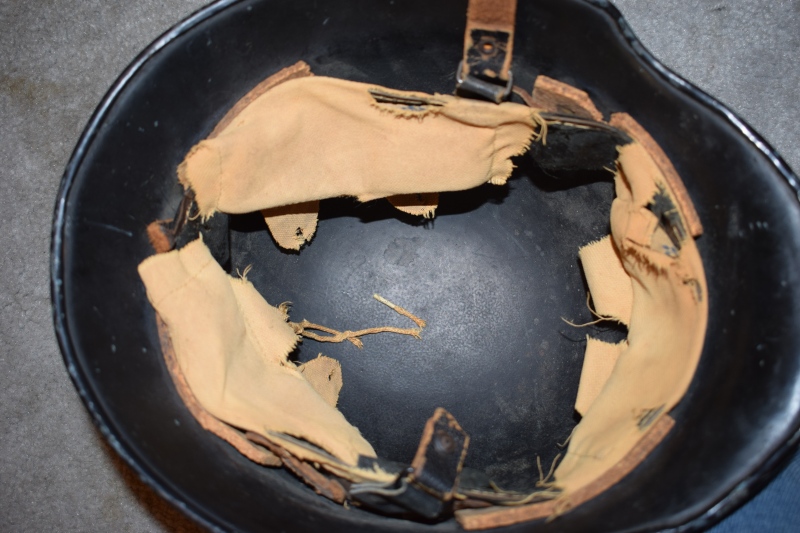 This is where the highest EMF readings were detected. 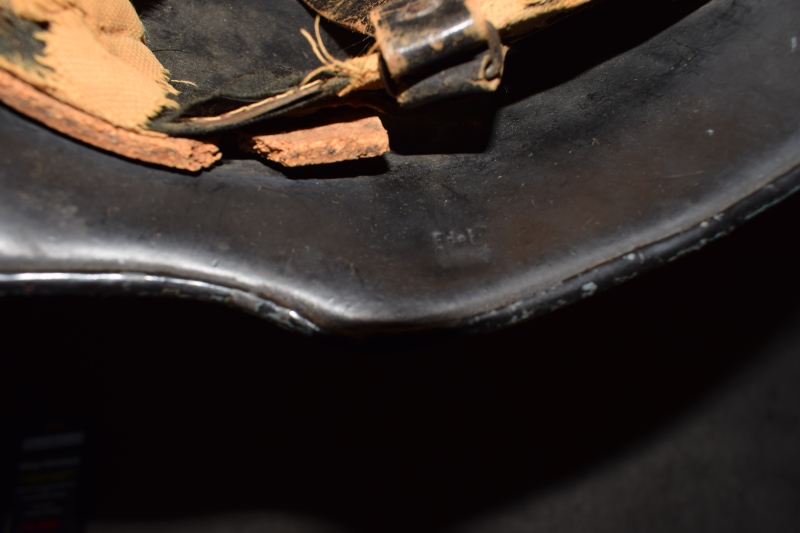 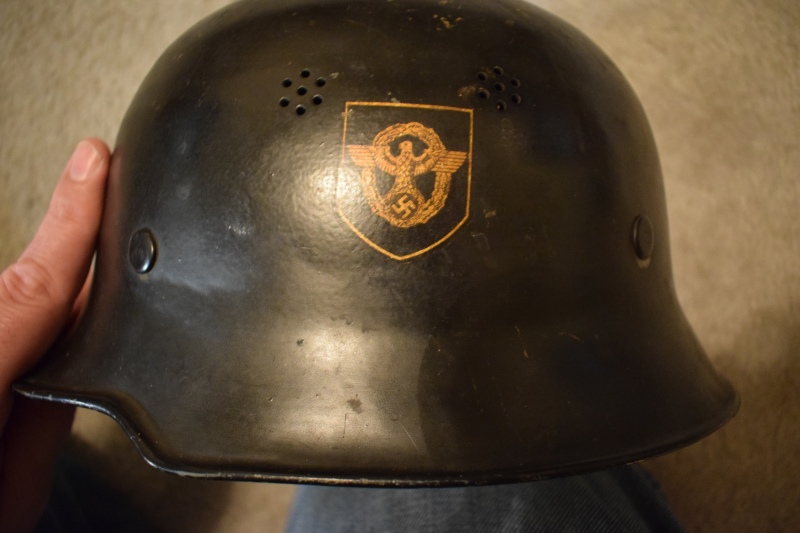 The “Edel” marking shows the helmet was manufactured by the Deutsche Edelstahl Company, which produced these helmets from 1934 to 1943. The markings on the helmet and the absence of the early “steel comb” that would run along the outside center of the helmet identify it as an Edelstahl helmet issued between 1940 and 1943. Interestingly, edelstahl also means “stainless steel” in German. The company’s name (translated) was the German Stainless Steel Company.

K2 meters consistently hit to “3” (the third light) or between 2.5 and 10 milligauss at the front of the helmet. The EDI Meter also hit to two lights on the helmet. The Trifield Meter, which is more sensitive than the K2 or EDI meters, and measures in microteslas  (1 microtesla = 10 volts / meter) hit to 100 microteslas on the front, center, and inside the helmet, essentially “pegging” the Trifield Meter. The meter was then set to filter out AC and DC electric current, radio waves, and microwaves, leaving unexplained electromagnetic energy as the only possibility that would even begin to account for these readings. Since the helmet is constructed solely of stainless steel, it is not and cannot be naturally magnetic by itself, leaving the cause of these readings as unexplained, or paranormal. Added to this, a glowing white orb is seen coming out of the helmet while the Trifield readings are being taken, and again flying behind the helmet as I conclude the readings, commenting, “That’s a haunted object, folks!”

Next, we conducted an SB11 Spirit Box session in the direct presence of the helmet. Almost immediately, we received the Spirit Box response, “Wie geht’s?” This is informal German for “How’s it going?” This alone constitutes proof of the paranormal – an intelligent response in German, while conducting a Spirit Box session in front of a suspected haunted Nazi helmet. It should be noted that the family is not of German heritage or descent, and there are no radio stations within a thousand miles of the investigation that broadcast in German. The SB11 Spirit Box response of “Wie geht’s” should be absolutely impossible.

Melissa and Wendy during the Spirit Box session.

We continued to receive responses in German to questions asked in German:

Investigator:  “Waren Sie im Krieg getotet?”  (Were you killed in the war?)

This response is interesting. “Da” is yes, in Russian. However, it is very close to the German word for yes, “Ja.”

A German spirit suddenly responding in Russian in this situation is not as inconsistent as one might think. On September 1st, 1939, Nazi Germany invaded Poland, formally opening the Second World War. On August 23, 1941, Hitler signed a non-aggression treaty with Joseph Stalin, the leader of the Soviet Union at the time.  On June 22, 1942, Hitler broke that treaty and invaded the Soviet Union, infuriating Stalin. This decision on Germany’s part would prove to be one of several in a series of decisions that played a major role in turning the tide of war in the European Theater and bringing about the destruction of the Third Reich. When the Allies invaded Northern France at Normandy on June 6, 1944, Hitler had spread himself too thin, having mounted a ground war across the largest sovereign nation in the world geographically. Ultimately, the Third Reich could not sustain this level of control over Europe as the Allies pushed from the West and the Soviets pushed back from the East. Poland was thus a pivotal battleground both early and late in the war in the European Theater.  The SB11 Spirit Box  responding in Russian, combined with the date the helmet was manufactured as an M1934, places this soldier on the Russian front in 1942, where he most likely met his untimely death.

Investigator: “Wann wurden Sie getotet?” (When were you killed?)

When we closed the Spirit Box session, We thanked the spirit for speaking with us. We received a final  “Tshcuss!” (So long!)

Based on this evidence and the investigation overall, the S.P.I.R.I.T. team feels confident in claiming that we spoke to the spirit of a deceased soldier of the Third Reich who died on the Russian front some time after June 22, 1942. The soldier was very pleasant and seemed genuinely pleased to be given a chance to tell his story. He was likely a young man in his early twenties – he knew little of the world that he died for. It should be reiterated here that even though he fought for one of the most destructive political regimes that the world has ever seen, he himself was just a human soul who found himself in the wrong place at the wrong time in history. This sad case was one that affected every team member in different ways. The evidence gathered in the case was, in our humble opinion, phenomenal, and difficult to discount as anything but concrete proof of the afterlife.

Melissa felt that he was reluctant to cross over for fear of punishment for his actions during the war as a soldier. These acts were very likely beyond terrible, and may have included killing civilians. We assured him (in German) that he would be welcome on the other side, that whatever acts he committed would be reviewed in the light of the fact that he did these things under military orders during the worst military conflict of the century. Ultimately, we felt the spirit was ready to cross over.

After meditating and crossing the spirit over, Melissa conducted a cleansing of both the home and the helmet, with energy work and holy water. After the cleansing, the S.P.I.R.I.T. team noted that the helmet was still giving off EMF readings, but at dramatically reduced levels.

The team also completed a walkthrough of the entire home, to ensure that the helmet was the only thing in the home that was haunted. In the upstairs Master Bedroom, Melissa picked up on the homeowner’s deceased mother, and felt constricted in the throat and chest. Indeed, the occupant’s mother had died of lung disease. Melissa also felt an intense male energy in the Master Bedroom closet – this turned out to be the living energy of the homeowner.

UPDATE: As of this writing, January 21, 2018, the helmet continues to cause EMF meters to go off at reduced levels.

EVP captured aboard the ship…

Photos from the adventure… 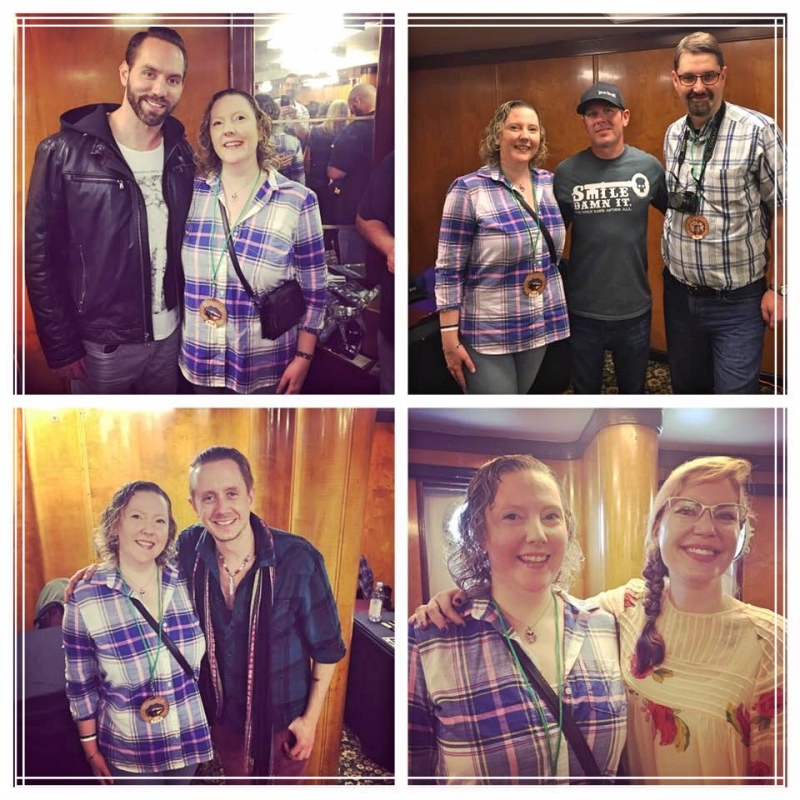 These two had the trip of a lifetime.

Below deck in the engine room. 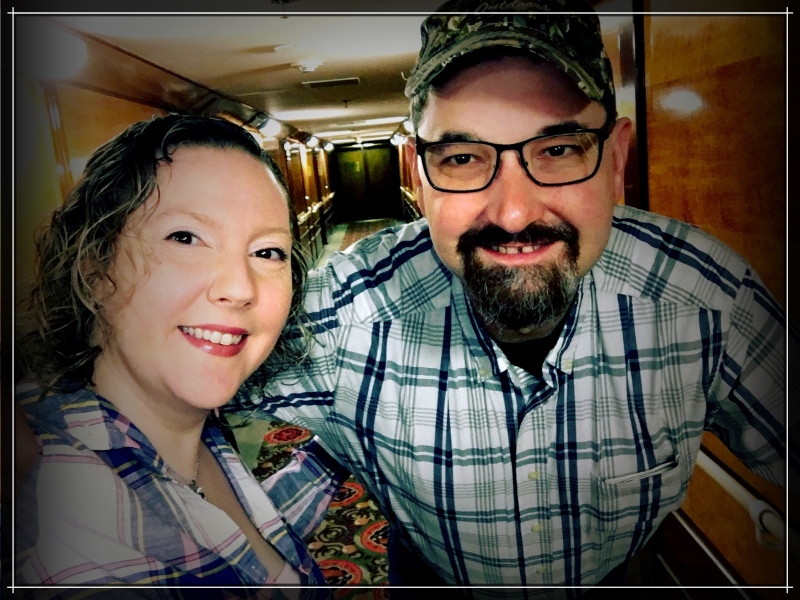 Melissa and Brent on deck.

Brent onboard in their quarters.

Queen Mary promenade deck – Thursday 2/2/17. General photography. Known haunted area. Two strange figures showed up at the end of the hallway which was empty of humans except the two investigators behind the camera. One appears to be a standing man, the other a female bending or sitting into a wall. 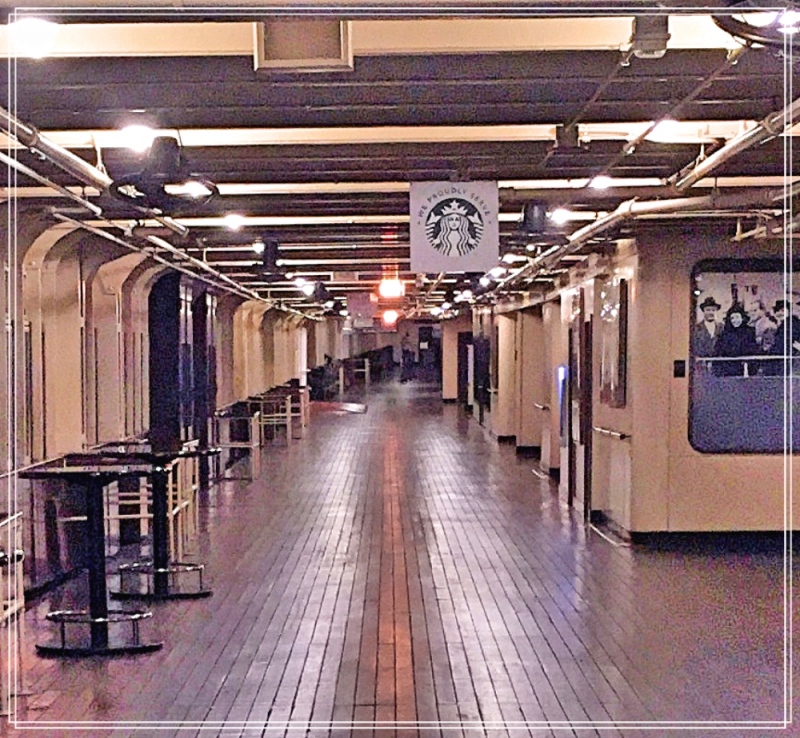 In another hallway, this anomaly was captured… 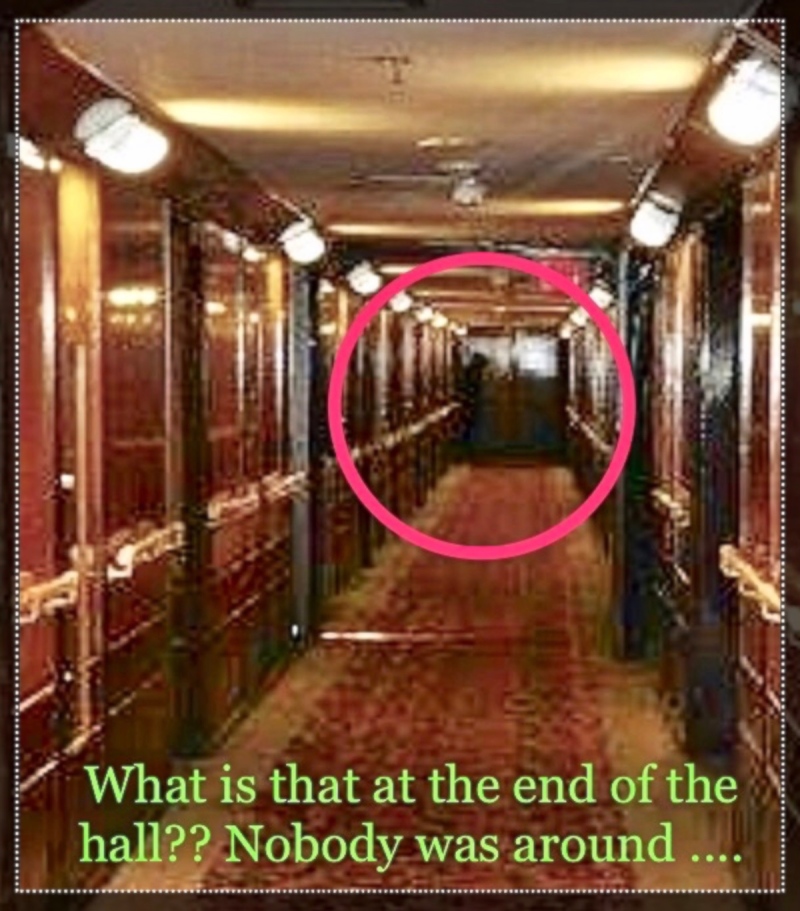